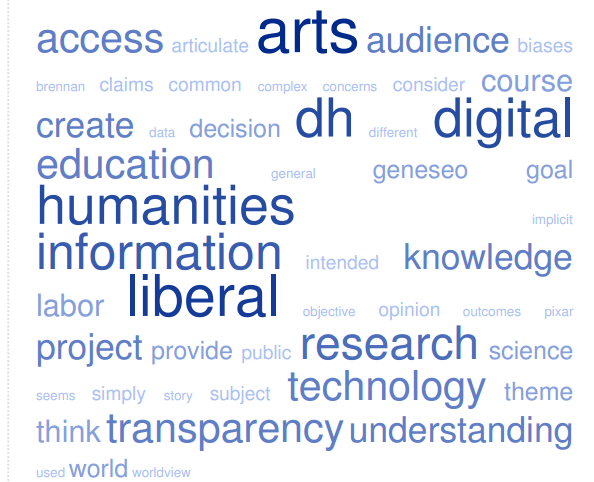 “Digital Humanities,” while not a new term to me, has until recently been a bit of an enigma.  I often heard professors speak of the digital humanities, but I never entirely understood the distinction between regular humanities and its digitized counterpart.  So when I enrolled in this course—a course in the digital humanities—I decided it was time to do some research.  My first lesson in the digital humanities:  DH is an ever-evolving field, with no set definition.  Most scholars agree that DH is a field of study in which technology is used to create new ways of articulating and understanding knowledge.  Beyond this, scholars often define DH based on how the technology is used; or to put it another way, DH is defined according to the intended purpose of using technology to re-articulate a piece of knowledge.

My thoughts on digital humanities are very similar to the opinions laid out in “The Sympathetic Research Imagination;” I see digital humanities as a technology of visibility—a method of making a body of information accessible to a greater audience.  On the other hand, I see the liberal arts as a dispositive of citizen-making; in my opinion, a liberal arts education is intended to provide people with the ability to both understand and think critically about the world around them, to embrace a diversity of worldviews, so that they may make informed decisions to improve society.  While I certainly consider liberal arts to overlap with DH—to the extent that I consider DH necessary for a legitimate liberal arts education—I see DH as different from the liberal arts in the way that it internalizes and articulates biases.

Liberal arts education—as I see it—at once encompasses bias and disavows it; in the mission of liberal arts—to create a citizen that can make an informed decision about what is occurring in society—one must be aware of the different methodologies of thinking that dominate our world.  For instance, at Geneseo, students are required to take a set of general education classes—with the purpose of creating “common goals and common values”—in writing, foreign language, arts, math, science, and social science, and then they must take a set of “liberal arts breadth” courses which include another round of arts, math, science, and social science, but also  two courses in the humanities and a course in “other world civilizations.”  Indeed, the Geneseo website lists under learning outcomes of general education developing “an understanding of the diversity and commonality of human cultures, both others and their own, along with knowledge of how these cultures developed.”  Implicit in these learning outcomes is the suggestion that liberal arts provides an objective understanding of the way societies come to be, as well as the suggestion that this knowledge will empower citizens in their ability to make informed decisions.

Digital Humanities, on the other hand, has much more modest goals.  Digital humanities seeks to provide access to the same knowledge that liberal arts make accessible, however, DH aims to make information transparent; that is, DH lays aside claims of an objective understanding of how the world exists, and instead makes visible information so that one may create their own worldview.  It seems then, that both liberal arts and digital humanities share the goal of empowerment, of formulating the subject as origin of knowledge and power.  To this end, liberal arts appears to be concerned with the creation of an informed minority, whereas DH concerns itself with the greater public’s access to vital information. Sheila Brennan notes that the goal of digital humanities is not simply to “digitize humanities,” but to provide information to the public transparently, coherently, and in a digestible fashion.  DH then, does not seek to understand the biases which liberal arts claims are vital to the making of an informed decision, but rather, DH allows the subject viewing the data to bring their own biases to the information.  This is not to say that DH is always unbiased—there is inherently a rhetoric and aesthetic to any portrayal of data that can intentionally or unintentionally sway the opinion of the viewer; however, DH, as constructed by Sheila Brennan, embodies a transparency and accessibility that liberal arts education does not.

So how does this relationship inform my research process?  Most simply, this conversation adds a level of complexity to my ruminations regarding the audience and theme of my project.  In more complex terms, contemplating liberal arts and digital humanities necessitates a consideration of the epistemological position of my project—that is, by accumulating information about public access to liberal arts in Geneseo, should I stake a claim in praise, critique, or some sort of evaluation of education in Geneseo?  Or would it be more appropriate to simply lay out the information, and let the audience make what they will out of the research?  I’m inclined to find a middle-ground (after all, this course is about telling a story); the transparency of the latter option seems like it would limit the possibilities of my overarching theme because of the exclusivity of the audience, while the prior does the opposite—it hyper-specifies the theme, thereby reducing the audience.  With this said, I think it’s entirely possible to make the research transparent and highly accessible while also working with a specific theme.  Indeed, I think transparency of research evokes another important aspect of the liberal arts education (and perhaps this is where liberal arts and DH dovetail):  labor.

Explicit in the documentation of digital humanities is the labor of the project; implicit in a liberal arts education is the promise that the subject will be prepared for labor.  Ultimately, the transparency and perceived simplicity of DH creates a transcript of the labor process of research; it demonstrates the capabilities and experiences of the researcher—and this is something I undoubtedly want to showcase with my project.  In attempting to articulate what I now see as the fundamental contemplation for my project, I’m reminded of a quote by Pixar co-creator John Lasseter regarding art and technology in Pixar movies:  “the art challenges the technology, the technology inspires the art.”  After considering the relationship between liberal arts and digital humanities, and the implication in my research, I think one of my biggest tasks will be to explore the digital tools and technologies that will best allow me to create a project that both transparently demonstrates the labor and research of the project, while simultaneously telling a captivating story to my intended audience.