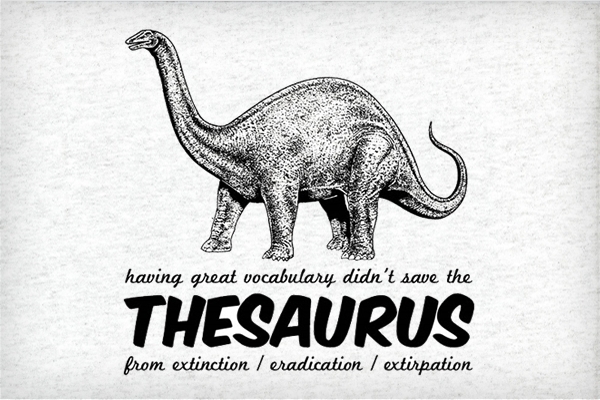 This week, I learned the power of vocabulary.  As I struggled (only semi-successfully) to find a plug-in that would allow me to build our course website the way I envisioned, I spent countless hours (and I don’t mean “countless” as the overused figure of speech—I mean literally uncountable hours) searching the web for plug-ins that would let me configure a piece of text to expand when clicked on.  And this task seems simple enough.  But so many unaccounted variables factor into finding the right plug-in:  vocabulary, edition of wordpress, edition of the plug-in, aesthetics, functionality, ease of applying plug-in, and so many more.  For my research reflection, then, I’ll explain the snags I ran into while searching for the proper plug-in, give a snapshot of what I’m trying to do with the page, and end with some updates on the progress of my work as well as what to expect this coming week.

For starters, I should attend to the title of my post, “His Vocabulistics is limited;” it’s a quote from Rocket, the cybernetic Raccoon of The Guardians of the Galaxy.  He’s referring to Groot’s vocabulary—and the fact that Groot can say “I am Groot,” and nothing else.  I found the quote applicable because finding the proper plug-in for a website is a ridiculous struggle of attaching a sound-image to a concept, a signifier to the signified.  On the internet, there’s no universal language for explaining the function of getting a piece of text to reveal more content when it is clicked on (and I tried searching exactly that), so searching for a plug-in is a trial-and-error process.  Is ‘expand’ the right word? ‘Collapse’? ‘Content Reveal’?  While reflecting on the process, expand seems the most accurate word, but many websites praised the possibilities of plug-ins like “WP-ShowHide” and “Collapse-O-Matic.”  And, to quote Christopher Nolan’s Inception, “once an idea has taken hold of the brain it’s almost impossible to eradicate.”  In other words, as soon as I thought I found a great word to describe the function I was looking for, tunnel vision set in.  I would search plug-ins with that word—and of course I found them, but they never worked just as I hoped they would.  As soon as I exploited the so-called plug-in resources of the particular synonym I had been working with, I thought up a new synonym for the dream plug-in.  Cue Nietzsche’s eternal recurrence.

Even once I determined that ‘expand’ was the proper word for explaining the function I was looking for, I had a plethora of ‘expander’ plug-ins to choose from—and they all had their perks.  For instance, “Easy FAQ with Expanding Text” was definitely the most customizable and functional plug-in; when the plug-in is activated it creates a sidebar when you’re writing a post or editing a page, and gives you many options to customize how you want a piece of text to expand.  When I found it, I was excited (understatement).  So I spent a while putting code around different pieces of text in order to ensure that clicking on a specific piece of text would result in the appearance of a hidden paragraph.  Once I had the coding perfected, I previewed the page.  Turns out “Easy FAQ with Expanding Text” doesn’t work with the version of wordpress we’re using.

By the time all was said and done, I downloaded and tested 11  plug-ins, and revised the page 19 times.  Here’s what it looked like when I half-gave-up-half-found the right plug-in. 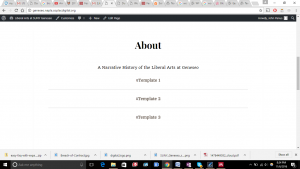 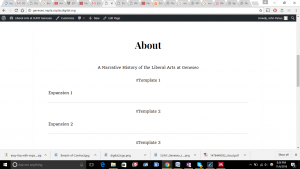 My evaluation of the plug-in?  It’s functional.  It gets the job done.  But I wish I could spruce up the headings—and maybe I can, that’s something I’ll work on this week.  Additionally, I despise the little down arrow/up arrow that serves as a visual cue for expansion.  Some other apps had really great visual cues that I thought were both functional and aesthetically pleasing, but I really don’t think the current down arrow fulfills either function.  I’m going to try to change that this week.  If I can get rid of it, but people think it isn’t clear that the text will expand, I’ll try adding a little comment at the top to let people know there’s more information.

Ultimately, I was hoping I could find a plug-in that would allow me embed an expansion property into an image:  I wanted to turn quotes into images so that hovering over the quote/picture would give a brief look into what sort of text would appear if you did click on the quote.  I’ll keep looking.

So what else did I do this week?  I finished transcribing our first interview.  I’m going to get that up on my blog and the course website this week.  Additionally, I’m going to try to get the edited audio file on the website this week.  Emily and I have two definite interviews this week, so that will be the primary concern for this week.  I’m going to keep working with the plug-in and website, and hopefully get rid of the expansion templates I have now and start some actual discussion that will make our website interesting. Additionally, I spent a good amount of time curating my blog, so I’m hoping I can put that on the back-burner for now.